leo&hyde are a musical theatre writing duo and theatre company who combine electronic sound-worlds and pop songs with contemporary stories about technology and modern life. We always aim to portray the depth in the seemingly shallow and the relatability of the seemingly pretentious – all with wit, spectacle, and affection – to create live theatrical experiences that go beyond the remit of the conventional musical.

Scroll down for our musicals, and to listen to some of our music!

“These hardy and inventive creatives… could be writing for the pop industry, and maybe very soon they will be: they have the ear of today and speak directly to the heart”
British Theatre 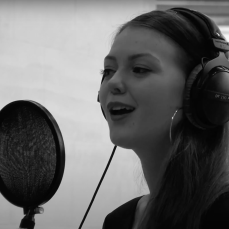 The company was set up in 2016 up by Leo Mercer and Stephen Hyde, two northern writers with a shared desire to change the soundscape of contemporary musical theatre.  Following the UK tour of their pop opera The Marriage of Kim K – a musical mashup between Mozart and the sleek electronica of the 21st century – they premiered a brand new synthpop musical GUY, a show exploring issues of toxic masculinity and body image in Manchester’s gay community. They workshopped their immersive coffee-shop show Queueue at Theatre Deli in 2019, and recently devised a spatialised music installation at Lancaster Arts, The wind that as it rushes through the turbine.

“leo&hyde are truly ones to watch”
A Younger Theatre 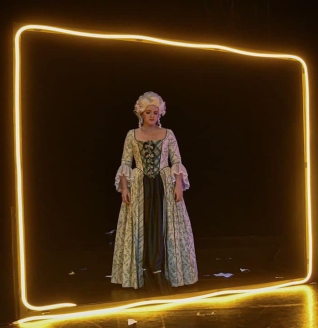 GUY (UK Tour 2018, 2020):
An award-winning electronic musical about romance, rejection, and self love within the gay community. With 12 heart-pounding electronic-pop anthems, GUY is the story of millennial life, a journey through bingeing, gyming, prejudice, hook ups, beauty standards, and stolen identity that will leave you proud, empowered, and a little bit in love. The show premiered at London’s Bunker Theatre & Manchester’s Hope Mill Theatre followed by a tour of UK fringe festivals. Following popular demand and critical acclaim, it transferred to the King’s Head Theatre, and will soon return for a UK tour, playing at venues including New Wimbledon Theatre (London) and Theatre by the Lake (Keswick).

Marriage of Kim K (UK Tour 2017, 2019):
A Gogglebox-inspired opera-musical which celebrates learning to love what you think you hate by fusing “high art” with “popular culture”. Three pairs of lives unfolding on stage – reality star Kim Kardashian and her 72-day husband Kris Humphries, Mozart’s tempestuous Count and Countess Almaviva from the Marriage of Figaro, and a young couple fighting over which of these to watch on TV – turns into a genre-defying smorgasbord of slick electronic pop, classical opera, and contemporary musical theatre.  It has garnered much critical acclaim across two UK tours, playing at venues including The Lowry (Manchester) and the Arcola (London).

“Hyde & Mercer’s The Marriage of Kim K seems to achieve
what so few [new operas] do: its own voice”
Culturised

Queueue (Workshop 2019):
Queueue is a cool indie coffee-shop, pretty much like your local – and you’re invited to sit in on a 21st-century musical odyssey whilst you eavesdrop on a typical day at the cafe. You can trust its friendly founder and barista, Jazz, to brew you the perfect coffee and put on the best new music as you encounter some familiar characters in his coffee-shop: the workaholic, coffee-holic globetrotter; the endlessly procrastinating PhD student; the awkward Tinder-swiper; and many more. Somewhere between a 21st century Company and Rent, Queueue is an eccentric, joyful snapshot of millenial culture as seen through coffee-obsessives, internet-addicts and music-lovers.

The Inevitable Quiet of the Crash (Edinburgh Fringe 2017):
A new musical telling the story of three women living in contemporary London, who must come to terms with their grief after a man they all knew in different ways is killed in a train crash. It features a jazz drumming score and an all-female cast, and premiered at the Edinburgh Fringe in 2017. 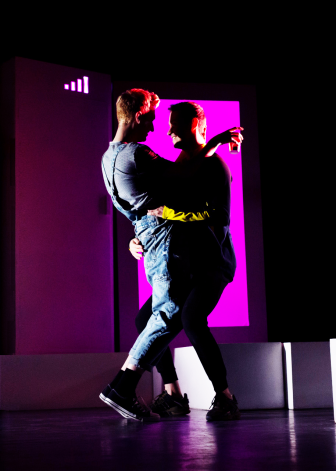 Processed with VSCO with hb1 preset

From opera to synthpop, ballads to hip-hop, take a dip into the sound-world of leo&hyde, with a selection of songs taken from our shows.